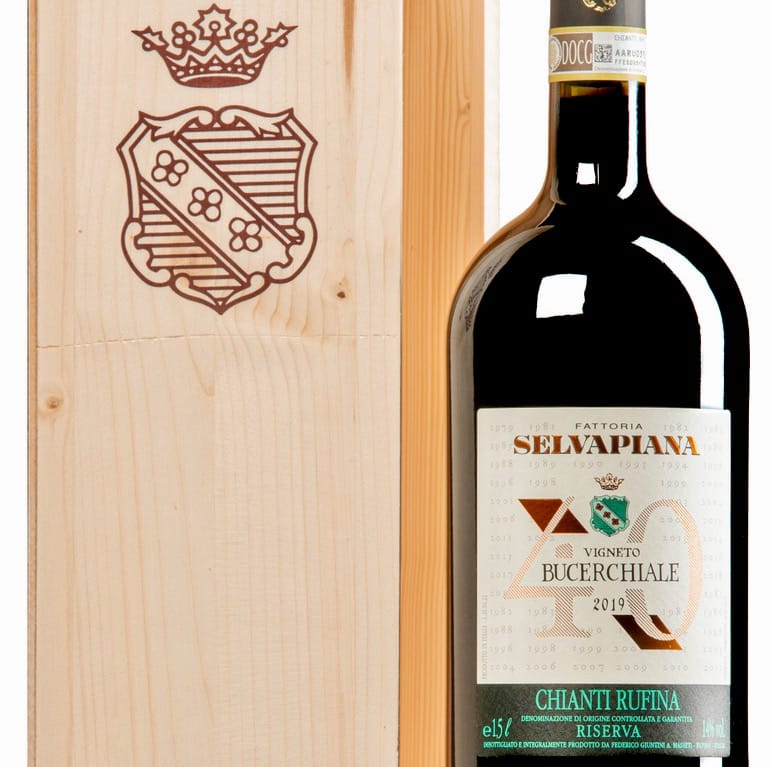 First created in 1979, the 2019 vintage of Bucerchiale marks the 40th anniversary of this single-vineyard wine that has come to define the area of Chianti Rufina. Its evolution also traces the momentous changes in the Italian wine industry over that time.

Bucerchiale is a south-west-facing vineyard in the cooler Chianti zone of Rufina, to the north of Florence. The area has always been cooler than the Chianti Classico zone that extends south of Florence to Siena, but that gives Rufina wines their characteristic freshness and elegance. Bucerchiale, says winemaker and co-owner Federico Giuntini Masseti, “has always been the best podere,” or smallholding, on the farm. Even in the past, when it was still dedicated to mixed farming.

Giuntini said: “In 1979 it was unique to produce 100% Sangiovese and from a single vineyard. It was the beginning of the renaissance of Tuscan wine.” At the time, the law still mandated that in order to call a wine Chianti, it had to contain Trebbiano – a sign of the times that valued quantity over quality. But Selvapiana wanted quality and made and bottled the Sangiovese grown in the Bucerchiale vineyard separately – defiantly labelling it Chianti Rufina Riserva. Giuntini remembers that while the law mandated Trebbiano – and Trebbiano was indeed planted in the vineyard because law enforcement checked vineyards rather than cellars – they made this 100% Sangiovese wine.

David Gleave MW, founder of Liberty Wines in the UK and importer of Selvapiana since 1986, said: “At that time there was no market for these wines, you could not sell an expensive Chianti – but they made it and kept it in their cellar. Most of the old vintages were just bottled and sat in the cellar to wait for a better future. And the better future arrived when we started to sell outside Italy.” Gleave filled in more history: “I think a lot of estates, when we go back historically in the post-war years, there were not selling wine in bottle, they’d sell wine to big negociants – Ruffino, Antinori, Melini. But estates like Selvapiana had a tradition of bottling, they started bottling after the First World War; Antinori had started bottling wines just after the turn of the century – and they were family.” In the interwar years Selvapiana’s wines were sold in restaurants in Milan and Rome – but the Germans “drank the cellars empty.”

The post-war years were meagre and hard. Yet there was a drive for quality. This history of bottling their own wine was one strand of Selvapiana’s philosophy. Another, according to Gleave, was Italian wine writer and journalist Luigi Veronelli who strongly advocated for quality and railed against the DOC laws of the day. “Veronelli was hugely influential,” Gleave said. The tide in Tuscany was turning, too, even though it took the law until 1995 to catch up. All around in the late 1970s and 1980s, 100% Sangiovese wines were made, mostly outside appellation laws – Montevertine’s Pergole Torte was the face that launched a thousand wines. Selvapiana’s Bucerchiale, first illegally then legally was always labelled Chianti Rufina Riserva.

The wines and the tasting

“Before tasting the last three wines,” Gleave said, “try and think what Tuscany was in those days. We moved from high crop, bad wine to making single vineyard wines.” Throughout those 40 vintages, from 1979 to 2019, things kept changing. At Selvapiana, consultant Franco Bernabei came in in 1978. In the 1980s the wines were still aged in chestnut barrels. Then the wine changed with the prevailing fashion, being made in smaller oak barrels and being extracted more in the 1990s and early 2000s. 2018 was the first vintage when the wine was made in 50% French oak and 50% large cask. The 2019 is a strikingly beautiful anniversary wine. There is less extraction now, more subtlety and much nuance. Yet the essential cherry nature and wonderful sense of place of Sangiovese shines in every vintage. Happy 40th, birthday and buon compleanno Bucerchiale – here is to the next 40!